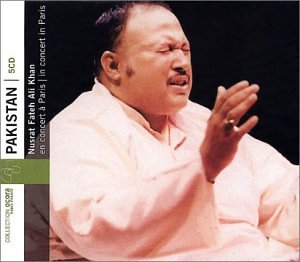 Pakistani qawwali music would be far less known today if not for its most extraordinary voice, the late Nusrat Fateh Ali Khan. His jazzlike improvisations of Sufi texts made their first beautiful noise in the West with a historic 1985 concert in Paris, which forms the initial two discs of this five-CD set. Discs 3 through 5 are culled from a 1988 live performance, though to chain the whole batch together on a multidisc CD player erases any seams. Ali Khan was a breakthrough artist whose octave-spanning voice and bottomless reservoir of passion made the leap from sacred music to movie soundtracks via Martin Scorsese's The Last Temptation of Christ and the score to Shekhar Kapur's 1994 cult film, Bandit Queen. Though schooled in the classic style by his father, renowned qawwal Ustad Fateh Ali Khan, Nusrat was far from a purist, even cutting the extraordinary pop music CD Nightsong with British producer Michael Brook. But he's at his peak in these electrifying concerts backed by his brothers and troupe on accompanying vocals, tabla, handclaps, and harmoniums. Long, stately pieces like volume 3's 33-minute "Nat-I Sharif" bend time and space as Ali Khan conveys serenity, ecstasy, yearning, and satiety in a performance with as many organic changes as the course of a major river. The shorter "Ghazal" love songs on volume 2 nudge heaven with breathtaking vocal elasticity. With a price in the range of many double-CD sets, this five-disc epic presentation is the ultimate expressive vehicle for this epic artist. --Bob Tarte

Complete in a Silent Way Sessions